One of the remaining extant Isolation Wards in regional Australia – a site of cultural significance that has been preserved and restored to inform future generations about the Spanish Flu Pandemic and its effect on the community of Tenterfield and the surrounding region.

The Spanish Flu Pandemic was the greatest natural disaster to afflict humankind since the Black Death plague (1346-1353), which was spread by fleas carried on black rats. The plague killed an estimated 75-200 million people over 7 years. In contrast, the Spanish Flu Pandemic 1918-1919 caused by a virus infected over 500 million people globally and caused 50-100 million deaths in just over a single year (May 1918 – July 1919). These figures are low because of the difficulty assessing both numbers of the afflicted and the dead on the Indian and African continents.

In November 1918, when members of the Tenterfield Hospital Board became aware of the approaching Spanish Flu Pandemic, they contacted the New South Wales Health Department requesting that plans for an Isolation Block be drawn up. They were completed in December 1918 by the Government Architect Office directed by George McCrae.

The virus spread rapidly around the world as soldiers and service women returned from active service at the end of the war. Being so remote from Europe, Australia had months to make the necessary arrangements. Despite a swift quarantine response in October 1918, cases of Spanish Flu began to appear in Australia in early 1919.

In Australia, approximately two million people caught the Spanish Flu and over fifteen thousand died. However, this mortality rate of 2.7 per 1000 population was one of the lowest recorded of any country during the pandemic.

A camp was established at the Tenterfield Showground after all trains travelling north into Queensland were stopped at Tenterfield, forcing all passengers to be accommodated in Tenterfield. The townspeople then had to accommodate and cater for these 700 stranded passengers, 500 of which were moved to the Showground for quarantine on 10 February 1919.

Tenterfield reported its first case on 26 June 1919 and by 14 July 1919 the local hospital had recorded 42 cases. The last of the 10 people who died from Spanish Flu in Tenterfield and district occurred on 18 July 1919.

By the time the building was completed in early 1920, there were no cases of Spanish Flu in Tenterfield. Nevertheless, it is to the credit of the Board members that a suitable Isolation Block was built to house the victims of any future outbreaks of infectious diseases. The residents of Tenterfield and district would have been well served if the pandemic had been present in the community beyond June and July 1919.

From early 1920, the building continued as the Isolation Block for the Prince Albert Memorial Hospital until the mid-1950s. When no longer required as an infectious ward it accommodated nurses. Later it became a maintenance workshop until the building was closed in 2015.

The Isolation Block retains almost all of its original materials and was built to reflect the Cottage Hospital design principles as espoused by Florence Nightingale.

Although the Isolation Block was threatened by demolition around 2006, its heritage significance was recognised by a small group keen to have the building restored. They lobbied to have the building listed by the National Trust (NSW) and added to the Tenterfield Shire Council’s Local Environmental Plan. Eventually it was also listed on the State Heritage Register S170. Funding from a Heritage Near Me Grant and from the Tenterfield Shire Council resulted in the conservation and preservation of the building.

The conservation and restoration of the Isolation Block at the Prince Albert Memorial Hospital in Tenterfield was completed in 2017. Because of its cultural significance, and as one of the few remaining extant Isolation Wards in regional Australia, a group of dedicated volunteers resolved to curate and install an exhibition about the history of the Spanish Flu Pandemic and its effect on the community of Tenterfield and the surrounding region. The official opening of the restored Isolation Block was held on Thursday 22 July, 2021.

Visitors are welcome to attend the site and observe the interior of the building through the viewing windows. However, it is currently not manned on a regular basis. 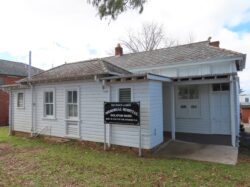 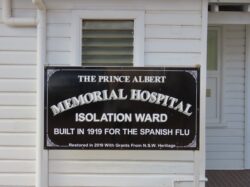 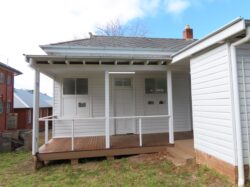 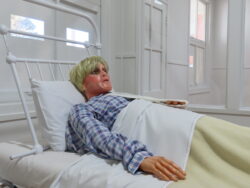 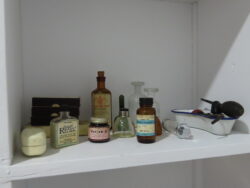 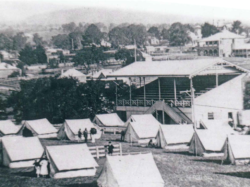