During World War II, low profile, defensive positions were established along many roads throughout Australia. The Mount Lindesay Road (then known as the New England Highway) was the only all-weather road from Sydney to Brisbane up until the 1950s, and was one such road to have tank traps constructed along it. It was part of the ‘Brisbane Line’.

During the war, up to 10,000 troops were stationed in and around Tenterfield. Many had returned from the Middle East and were trained here in jungle warfare before being sent to New Guinea and the Pacific.

Tank traps were established at Thunderbolt’s Gully, which was one kilometre north of a major training camp in the Tenterfield region, the London Bridge Army Camp. The site was also chosen as the area either side could not be easily bypassed. The huge boulders on the hillside on the eastern side of the road were considered too much of an obstacle for the light Japanese tanks. The concrete retaining wall prevented them bypassing the holes left by the exploding mines in the road, which was then a narrow gravel one.

When visiting the site today, you can see the three rows of wooden posts (1500mm or 5ft in the ground and 900mm or 3ft out) that were erected to force enemy tanks to rise up, exposing their soft underbelly. The rockfall further down from these posts was from rock blasted up higher to make the passage more difficult. Drill holes can be seen in this fallen rock. 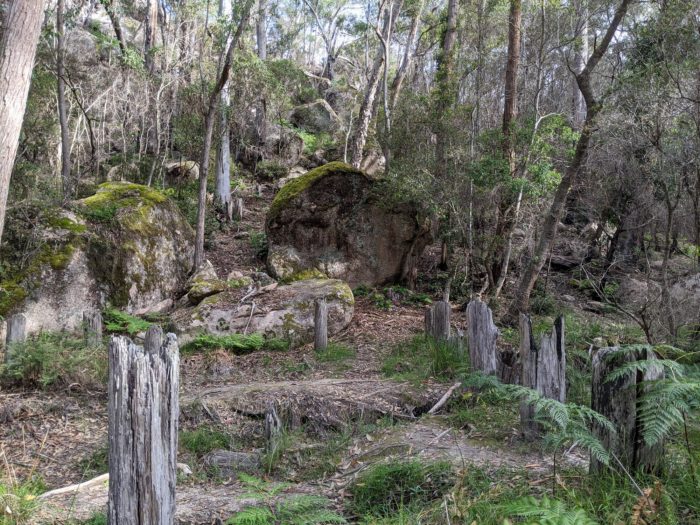 For some time after the war, the concrete pipes that would have contained the explosives were visible, protruding slightly above the gravel surface. The area, a forced funnelling of the Japanese expeditionary force, was a trap that would put them at a disadvantage, whilst well dug-in forces could hold them for some time.

A one kilometre walking track has been built through the rockfall and down the gully to Thunderbolt’s Hideout.

The Tank Traps at Paddy’s Flat were also an integral part of Australia’s defences during World War II.

This was a line drawn from Brisbane to Adelaide (some maps show it from Brisbane to Perth). It was claimed that as Australia was unable to protect its huge coastline, the more densely populated areas would be protected. Should an invasion occur, the population north of the line would be evacuated south.

Paul Burns’ book ‘The Brisbane Line Controversy’ is a well written commentary on the background to this concept. Due to the publicity given to the Brisbane Line, the local residents, and those of Northern Queensland, accepted it as a fact. In a complicated sort of a way, it was. The Battle of the Coral Sea began on May 5 1942 and stopped the Japanese Fleet bound for Port Moresby. The East Asian Co-prosperity Sphere was to have been all of PNG, Darwin and north Queensland. Had the attempt to take Port Moresby by the Japanese Fleet been successful, the defensive line here may have been put to use just a short time afterwards.

The World War II Tank Traps is a project of the Rotary Club of Tenterfield. Signage is being installed, the area has been cleared and cleaned following bushfires in 2019, and new tank traps have been installed to protect this history.