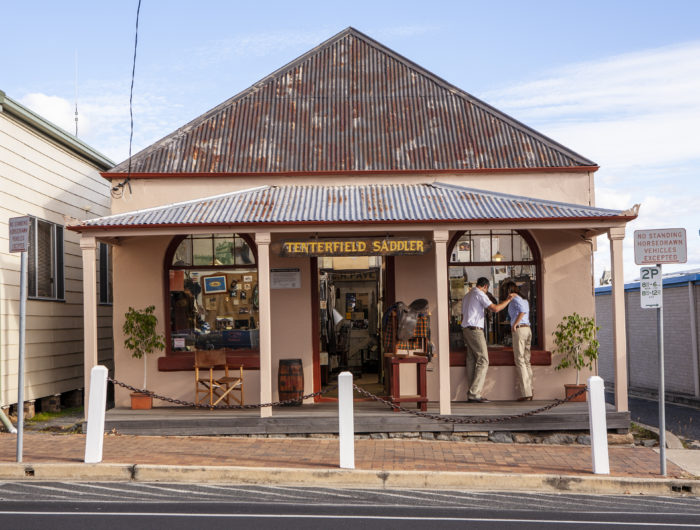 “The late George Woolnough worked on High Street and lived on Manners,
Fifty-two years he sat on his verandah, made his saddles,
And if you had questions about sheep or flowers or doves,
You just asked the saddler, he lived without sin. They’re building a library for him”.

Please note: The Tenterfield Saddler is privately owned and is able to operate thanks to the generosity of local volunteers. Depending on volunteer availability, the museum may be closed at times.

While Australian singer and songwriter, Peter Allen, immortalised the Tenterfield Saddler for the rest of the world, George Woolnough, who also happened to be Peter’s grandfather, was already legendary among generations of Tenterfield residents.

George purchased the saddlery on High Street in 1908, operating it until his retirement in 1960. George’s accommodating and compassionate nature saw the saddlery become a gathering place for men throughout the region. They would meet there and discuss all manner of topics while George worked and listened, undisturbed by the chatter of the men who would wander in.

Sometimes the men would bring their children, who would play with the leather offcuts while their fathers talked. Many of them are still around today and have fond memories of their visits to see George, the Tenterfield Saddler.

The saddlery was no stranger to famous faces, with iconic Australian poet and author, Banjo Patterson being a regular visitor during his time in Tenterfield in the early 1900s. George’s own grandson, Peter Allen, would also visit the saddlery to spend time with his grandfather. The words of his song, Tenterfield Saddler, pay tribute to George, his generosity of spirit, and his place in the heart of the town.

George died in 1963 and his grave is in the Tenterfield Cemetery, C/E – Row E, Lot 34. His home still exists and is privately owned at 30 Manners Street. Peter released the beloved song, Tenterfield Saddler in 1972.

In 1858, one of the original graziers in the region, Sir Stuart Alexander Donaldson, purchased the land that the saddlery sits on for 32 pounds 10 shillings. Sir Stuart was the owner of Tenterfield Station, after which the town was eventually named, and went on to become the first Premier of New South Wales.

In 1870, it was sold to Charles Pavel, the first saddler, for 34 pounds. He then sold it to the Australian Joint Stock Bank in 1874. The old building was perfect for use as a bank as the granite walls were over 20 inches thick. From 1895-1897 the building was a private home, before being sold to the town’s second saddler, Dan Egan. George Woolnough became the next saddler to trade from the building in 1908.

The National Trust of Australia classified the Tenterfield Saddlery in 1972. Apart from maintenance, the saddlery is in its original condition and houses memorabilia and leather goods.

To this day, the saddlery attracts visits from Peter Allen fans who want to see the home of the famous Tenterfield Saddler.

The Saddler is usually opened by a small group of dedicated volunteers, who look forward to welcoming you back and having a yarn about the fascinating history of the building and the area. The Saddler is open a couple of days each week, and for large groups can be opened by appointment. If you are making a special trip, please call ahead to check on opening times and days.